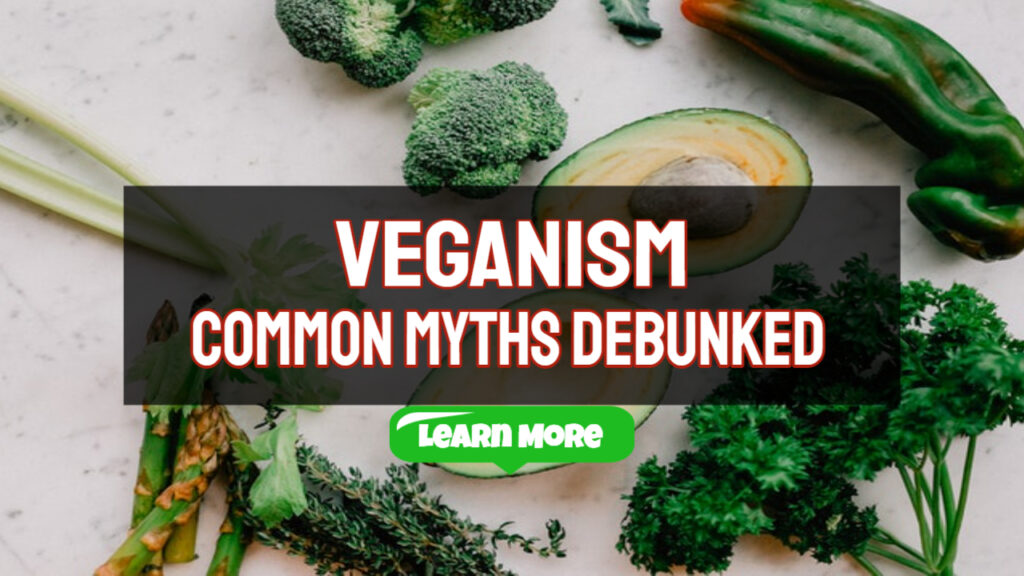 Veganism Myths Debunked: It’s boring, it’s too pricey, and I’m not going to get enough protein by eating it. Some of the falsehoods (read that as “excuses”) that surround the vegan diet are listed below. So let’s see if we can’t completely blast some of these out of the water together.

One common misperception is that eating healthy will cost you money. This is not the case, especially when it comes to veganism. Indeed, I’m perplexed as to how this justification came to be, given that 8oz of steak costs dollars per pound whereas beans or mushrooms cost cents/pennies per pound.

Fruits and vegetables, as well as grains, legumes, nuts, and seeds, are the major components of a vegan diet. These are all items that can be purchased in bulk at most grocery shops or supermarkets at a reasonable price. Then there are vegan alternatives to animal items that are likewise inexpensive, such as vegetable burgers and soy hot dogs. They don’t spoil easily and are excellent for you, so they’re also wonderful investments.

Milk substitutes, such as soy milk, can be equally as expensive as cow’s milk but give health advantages such as calcium, which is essential for strong bones. For many people, this advantage exceeds the added expenditure. Soy products are frequently high in protein, making them more expensive than less healthful meals, but their nutritional content makes them well worth it. People who buy tofu on a daily basis would most likely spend more money on meat if they did not consume soy products.

Because fruits and vegetables retain their nutritional content even when frozen or canned rather than fresh, healthier vegan alternatives tend to be less expensive than eating meat.

It is simple to have a balanced, nutritional, and economical vegan diet without spending a lot of money or time making difficult foods. Eating vegan can save you time when shopping since it allows you to get everything you need from a single location, such as a grocery store or supermarket, rather than exploring multiple separate places for ingredients that may not even be available there.

Because most fruits and vegetables are tasty fresh, you may save money by not using power or gas to prepare meals.

Is it too expensive? It costs more to be unwell in the future than it does to invest in healthy eating today. Consider it a different type of health insurance (1).

Myth #2 – a plant-based diet is bland

Umami is a fundamental flavor (the others being salty, sweet, bitter, and sour). Umami appeals to us because it makes our mouths thirst for more food. Humans love meat because it contains glutamate, which is responsible for the umami flavor (2).

However, there are several vegan sources of glutamate that provide a similar flavor sense. Grains contain a lot of free glutamic acid, which naturally converts to monosodium glutamate. Soy sauce and fermented bean paste are two more foods that are high in glutamate (miso). Mushrooms, tomatoes, and sea vegetables, particularly kombu, offer the umami flavor we love (3).

Yeast extract, popularly known as Marmite or Vegemite, is an excellent source of umami flavor. This delectable spread may be eaten on toast or mixed into spaghetti to fulfill the umami need. Because it has a salty flavor, it may be used in soups, stews, sauces, and casseroles for a flavor boost.

Spices and condiments such as salt and pepper may transform any meal into something wonderful without the usage of pricey products such as meat or fish. With these few ingredients, it’s simple to make flavorful recipes. They last a long time and you only need a small amount, so they save you money as well.

Another thing to remember is that nothing tastes better than rescuing the earth and the lives of countless creatures.

Myth #3 – you need to eat meat and eggs to get enough protein.

When discussing a vegan diet, one of the first topics that most people bring up is whether or not you can obtain enough protein.

Protein is a necessary macronutrient that aids in the healthy functioning of your body. It is very important to include in a healthy diet since it supplies building blocks for muscle growth and repair (after exercise or injury). Plant-based meals include a lot of protein. Don’t worry if you’re a vegan trying to preserve your health while being active! Many plants, such as kale, provide lots of protein, as do beans such as soybean sprouts, which have roughly 5 grams per serving, and lentils, which have 4 grams per cup.

Protein quality is crucial, and while meat has more protein than plants, veggies also have a lot of it. We’re talking about quality above quantity here. Vegan protein sources include tofu, beans, nuts, seeds, tempeh, and edamame (4).

The fact is that we are suffering from more heart disease, cancer, and diabetes than ever before as a result of eating more animal protein. This is due to the cholesterol in meat, which veggies do not have (5).

Another thing to consider is when was the last time you heard of someone in the Western world suffering from a protein deficiency? (6) We consume twice as much food as we should on a daily basis. Fiber is something we don’t get enough of. That is the issue! Please accept my apologies, but a lack of fiber is a million-dollar constipation problem (7). To prevent bowel cancer, we need 30g of fiber every day. That is far more essential than being concerned about obtaining adequate protein. Plants are the only source of fiber. There isn’t any meat.

Anyone who claims that a plant-based diet will leave you deficient in protein is delusory. As evidence, the world’s largest and most powerful creatures, such as elephants, rhinos, and giraffes, solely consume plants. M’lord, I rest my case!

Myth #4 – You don’t get enough nutrients on a plant-based diet.

What a bunch of nonsense!! I can’t believe this is something that people believe. Plants contain far more nutrition than animals. They are more nutrient-dense pound for pound. I find it astonishing that someone who lives on a fast-food diet with all of the nutrients removed can compete with me on a vegetable-rich diet (1).

When you think about it, our forefathers didn’t eat a single manufactured food. They ate fresh fruits and vegetables as well as the occasional animal that they were able to capture. I believe our forefathers would have gone extinct if they had consumed fast food.

The naysayers are frequently the least knowledgeable because they believe that if they yell loud enough about vegans, it will shift the emphasis away from them and what they consume every day!! Sorry for the rage!

Brought To You By – Local SEO – Google Ranking Monster

Ways Micro Offers Can Assist You in Growing Your Online Business