The Coco Chanel Logo – History & Inspiration of the Brand

Founded in 1910 by Gabrielle Bonheur Chanel, better known as Coco Chanel, the distinguished house of Chanel is famed for its intricate, divine, and beautiful designs. For her daring and opulent creations, Coco Chanel’s fashion brand has been called an early pioneer in modern feminism. Chanel No.5 is the most famous of her many women’s perfumes, and it continues to sell millions even after the firm was founded more than a century ago.

Chanel’s history has always been known as intriguing and controversial, ranging from Nazi collaborators to spying and sleeping with army generals! After declaring war on the fashion industry, Gabrielle shut down all but one of her stores. Upon her return in 1954, she was a financial hit in the fashion industry and was lauded as a new means of linking young people to fashionable attire. To this day, Coco Chanel’s famous handbags, logo, and perfumes are recognised the world over.

The logo of Chanel’s fashion house may be more well-known than the products themselves. “Luxury and glamour” is instantly recognisable by the C’s linked together. The logo was designed in 1925 by Gabrielle Chanel, who said she was inspired by the stained glass windows of a nearby abbey as a child. 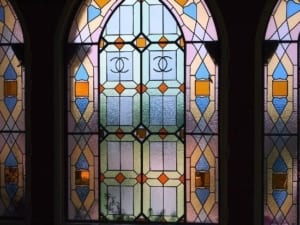 According to the fashion house’s official explanation, Coco Chanel was inspired by Queen Claude of France, who employed a similar emblem at Chateau Royal De Blois, as evidenced by a photograph of the Chateau.

According to another interpretation, the initials “CC” and “AC” stand for “Coco Chanel and Arthur Capel,” a posthumous amorous tribute. Arthur was a co-founder of the company and also her lover. Is it possible that Gabrielle’s depression was a tribute to Arthur’s death in 1919?
Looking for Coco’s creative scent…

Because of her early success, Coco was able to pursue new endeavours. Chanel N°5 was her debut perfume, released in the early 1920s.

As one of her greatest triumphs, Chanel No.5 is unquestionably one of the world’s best-known perfumes.

However, this was not her last time.

When she designed the Chanel suit and the little black dress back in 1925, it was a huge success. The LBD, a modern-day fashion classic.

What Is the Story Behind Coco Chanel’s Iconography?

Famous for her timeless creations, such as the classic suit and the little black dress, fashion designer Coco Chanel made a name for herself. In the 1920s, she created her first perfume and eventually introduced the Chanel suit and the little black dress, all of which were designed to be more comfortable for women to wear. She became a style icon for her basic yet classy ensembles mixed with fantastic accessories, such as multiple strands of pearls..

The nuns who reared Chanel taught her how to sew, a talent that would lead to her career as a fashion designer later in life. Her nickname was derived from a very other occupation. Coco was the nickname given to Chanel during her brief singing career in Vichy and Moulins.

According to an article in The Atlantic, Chanel claimed that the name was a “shortened version of cocotte, the French phrase for ‘kept woman.’” Some claim that the name was inspired by a song she used to sing.

History of Fashion’s Next Big Thing

During her early twenties, Chanel met Etienne Balsan, a millinery business partner who offered to help her launch her own business in Paris. She immediately moved on to Arthur “Boy” Capel, one of his more wealthy acquaintances. Their contributions to Chanel’s first foray into the fashion industry cannot be underestimated.

In 1910, Chanel opened her first business on Paris’ Rue Cambon selling hats. Deauville and Biarritz were also added, and she started producing garments.

When she was young, she made a dress out of an old jersey on a cold winter day. As many people inquired about where she purchased the outfit, she offered to make one for them. “My fortune is built on an old jersey that I had put on because it was cold in Deauville,” she once told author Paul Morand.

Chanel gained notoriety in the literary and artistic circles of Paris. Jean Cocteau and Pablo Picasso were two of her close friends, and she designed the costumes for the Ballets Russes and the play Orphée.

Chanel expanded her burgeoning business to unprecedented heights in the 1920s. It was the first perfume to bear a designer’s name when she released Chanel No. 5, her first scent. Chanel famously said that perfume “heralds your arrival and prolongs your departure” because it is “the unseen, unforgettable, ultimate accessory of fashion.”

As well as department store owner Théophile Bader and businessmen Pierre and Paul Wertheimer, Chanel developed a close friendship with Pierre and helped fund the scent.

It was subsequently agreed that Wertheimer would receive 70% of Chanel No. 5 earnings for manufacturing the perfume at their factories, while Bader would receive 20% and Chanel herself would receive only 10% of the profits from this arrangement. Throughout the years, as No. 5 was a major source of cash, she filed numerous lawsuits to change the terms of the agreement.

Chanel introduced the now-iconic Chanel suit in 1925, which included a collarless jacket and a skirt tailored to the wearer. Her designs were groundbreaking at the time because they drew inspiration from menswear and placed an emphasis on ease of movement rather than the rigidity of prevailing styles at the time. Corsets and other restrictive clothes were no more thanks to her.

During the 1920s, the little black dress by Coco Chanel revolutionised the fashion industry. A colour long linked with grief was transformed into a nighttime wardrobe staple by her.

The logo for Coco Chanel was created by…

Who is Coco Chanel’s founder?

It was Gabrielle Bonheur Chanel who started the house of Chanel.

How long ago was the Coco Chanel logo first created?

The post The Coco Chanel Logo – History & Inspiration of the Brand appeared first on https://gqcentral.co.uk

Impact of Ear Injury on Hearing and Posture