Herbs That Help You Breathe Better 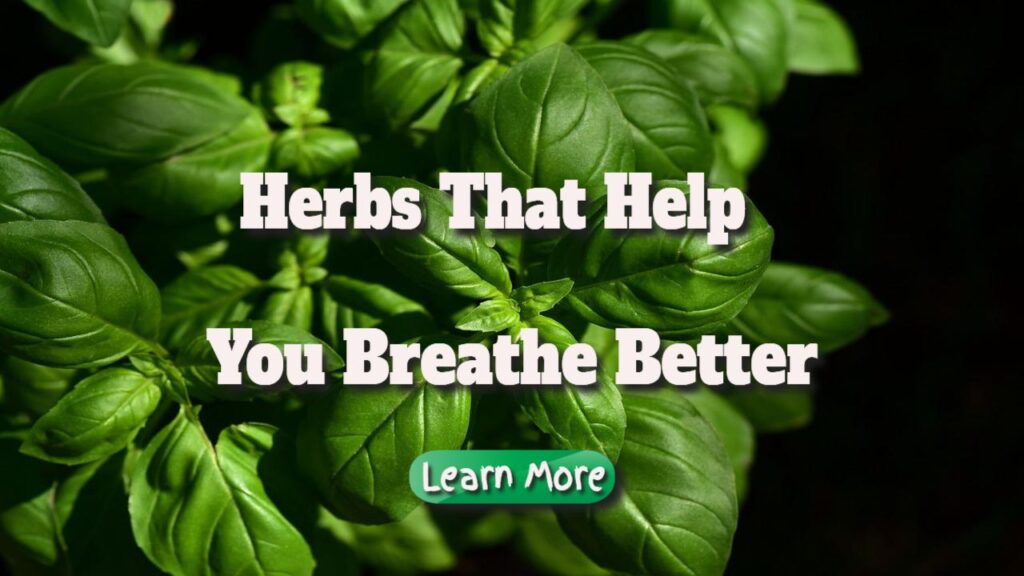 Herbs That Help You Breathe Better

Herbs That Help You Breathe Better: Despite the fact that breathing is a difficult and necessary activity, most of us do it unconsciously. Our lungs are in charge of expelling carbon dioxide and receiving oxygen from the environment. Because of this gas exchange, our bodies can function normally. The great majority of people can have breathing problems due to asthma, pneumonia, or a congested nose caused by a cold or virus.

Traditional medications are frequently used as the first line of treatment by doctors. People who have breathing problems may find that changing their diet and incorporating particular herbs into their daily routine might help reduce their symptoms.

Because they include components that reduce congestion, many herbs can aid with breathing problems. Finding the correct herbs for your requirements may require some research. Consult your doctor before commencing any herbal treatment, especially if you are already using medications. This is due to the fact that certain herbs can have unfavorable interactions with other drugs. Finding herbs that will help you breathe more peacefully is as simple as trial and error.

Herbal treatments are effective in treating respiratory diseases. Sage tea, for example, can be used to treat respiratory disorders such as asthma and bronchitis.

Licorice root is an effective herbal therapy for people who have respiratory problems. Glycyrrhizin, an anti-inflammatory compound found in licorice root, can help reduce asthma symptoms. This drug works better when combined with inhaled asthma treatments.

Ginger is a popular cure for respiratory issues throughout the colder months. When coupled with licorice root and hot water, ginger has a good effect. The two function together to open up a congested nose and make breathing easier.

Peppermint has traditionally been used to treat respiratory problems. Asthmatics and bronchitis sufferers, as well as those with congested nostrils, can benefit greatly from this medicine. Because of its anti-inflammatory properties, it aids in the opening of the airways. Inflamed nasal mucous membranes can be reduced in size, allowing for easier breathing and more air to enter the lungs.

A delightful beverage is made by combining hot water and peppermint leaves. In addition to cleansing the sinuses, peppermint oil can assist relieve congestion symptoms. Peppermint is also an anti-inflammatory because it kills the microorganisms that create inflammation in the first place.

The menthol element of peppermint accounts for its efficacy. The first herb that springs to mind is menthol, which makes breathing easier. Menthol functions as a natural bronchodilator because it relaxes the muscles surrounding the airways. It has antibacterial and anti-inflammatory characteristics that aid in the treatment of respiratory issues. Inhaling menthol drops dissolved in hot water is a helpful treatment for respiratory disorders such as asthma.

Menthol is a popular ingredient in cough and cold treatments such as Vicks Vaporub. This chest rub has long been a favorite of both children and adults. When we were tiny and contagious with colds, our mothers used to caress them on our chests. Its capacity to cleanse congested nostrils allows you to breathe more readily.

In addition to camphor, Vicks Vaporub contains eucalyptus. Eucalyptus, a natural decongestant, has been demonstrated to help relieve the symptoms of a cold or flu. Furthermore, by reducing pressure, it can help to relieve congestion and open the airways. Eucalyptus oil can be calming when applied straight to the skin. Eucalyptus is an excellent choice as an all-purpose herb that aids with breathing. Patients suffering from asthma and sinusitis benefit the most from it.

Camphor is another smell that aids in breathing when we are ill. It is found in several over-the-counter cold medicines, including chest rinses and nasal sprays. It aids in the removal of mucus from the nasal passages.

The advent of hay fever season may aggravate our incapacity to breathe. Pollen from flowers and grasses can cause allergic reactions in certain people during the spring and summer. A common side effect of an allergic reaction is sneezing and difficulty breathing. Seasonal allergies can be treated with over-the-counter antihistamines, but herbal alternatives work just as well. Echinacea is one of these herbs. It strengthens the body’s immune system against pollen and other allergies. Nettle is another natural antihistamine.

Lungwort may be beneficial to persons suffering from respiratory issues. It was traditionally used to treat asthma and other respiratory disorders.

Plantain leaves are another fantastic alternative for respiratory health (not from the banana plant family). It’s a natural expectorant that can help remove mucus from the lungs and improve breathing. Plantain leaves can be used to prepare tea or as supplements.

Horseradish is well-known as a spice, but it can also be used as a home cure for colds and flu. For decades, it has been used to open the sinuses and relieve sneezing, coughing, and congestion.

This is a natural decongestant made with ginger and horseradish.

Fill the small container halfway with apple cider vinegar, seal it, and shake vigorously. Stir vigorously until all of the ingredients are well combined.

As needed, take 1-2 tablespoons per day.

Herbs such as marshmallows, licorice, ivy, and elderberry have been shown to improve respiratory symptoms caused by the Covid 19 coronavirus. Breathe in and out with joy if you have respiratory troubles and are considering self-medicating with herbs and plants!

The post Herbs That Help You Breathe Better appeared first on https://gqcentral.co.uk

What Is A Psychic Medium? There’s More Than Meets The Eye

A Guide To Tooth Enamel Erosion And Restoration